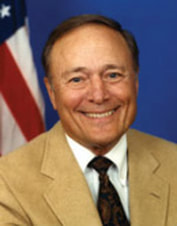 Congressman Bill Archer
As Chairman Bill Archer was preparing to retire from Congress, he began to think about what he wanted to do with his legacy. He looked over his accomplishments while in public service and believed strongly in building on a program he began as a freshman representative - an internship program that brought high school students from his district to Washington, D.C. The program had been a very successful endeavor that allowed one representative student from each high school in the district to visit Washington over spring break and take lessons learned to their classes back home. Over the course of the 30 years that this program ran, the Chairman was able to give these students an experience in leadership and noble public service.

Chairman Archer explored ways to build upon this idea. He partnered with his alma mater, The University of Texas at Austin, and specifically with the College of Communication and the UT System Office of Federal Relations, to create the Archer Center in Washington, D.C. This Center was to be the D.C. home of all academic programs and experiential learning for students, staff, faculty, and alumni from the various campuses of the UT System. Over the course of the first two years, Chairman Archer helped to raise an endowment that would provide seed funding for a full-time staff member and a basic budget for the first programs. Chairman Archer made a generous donation as he closed out his campaign fund. Additionally, Conoco Phillips, Marathon Oil, the McGovern Foundation, El Paso Energy, and others helped to provide for the initial endowment.

In January 2001, just as Chairman Archer was shifting out of his life in public service and back to the private sector for the first time in 40 years, the inaugural class of the Archer Fellowship Program, comprised of 10 students from UT Austin, arrived in Washington, D.C.  In the last 19 years, more than 1300 of the brightest undergraduate and graduate students of the UT System have participated in a semester- or summer-long experiential learning program that allows each student to work in a full-time internship and attend courses for in-residence credit. Archer Fellows work in the White House, across Capitol Hill, in various federal agencies and non-profits, in international organizations, and in governmental arms of private sector entities.

Archer Fellows have used their semester in Washington as a springboard to impactful careers or to pursue graduate training at the best institutions this country and the world have to offer. Hundreds of our fellows have since graduated from or are enrolled in doctoral programs or professional programs in law and medicine at such prestigious universities as Harvard, Stanford, Princeton, Yale, Carnegie Mellon, Oxford, Georgetown, London School of Economics, Johns Hopkins, Columbia, Cornell, Dartmouth, MIT, Virginia, Pennsylvania, Michigan, and every campus within the UT System.  Their accomplishments have been distinguished by the awarding of Truman, Marshall, Rhodes, Schwarzman and Fulbright Scholarships in further support of their education.

The Archer Center is thriving in Washington and continuing to build a portfolio of programs to further carry out Chairman Archer's mission to educate the next generation of leaders for local, state, federal and international service. The future await us. We hope to continue to grow and provide a bigger home for individuals traveling to D.C. and still more opportunities for living, learning, and working in our nation's capital. 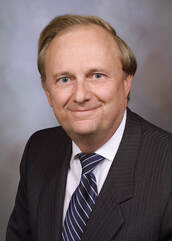 Don Carlson
Don Carlson’s wide range of legislative, international, and political experience spans a 34-year Capitol Hill career. For 30 years, he worked for Congressman Bill Archer, Chairman of the House Ways and Means Committee, representing Houston’s 7th Congressional District. Mr. Carlson served as his chief of staff from 1988 to 2001. He was Congressman Archer’s prime liaison with the members and staff of the Ways and Means Committee and the Joint Committee on Taxation. Prior to assuming that position, he was Congressman Archer’s legislative director, with responsibility for all of his legislative/committee work. His primary areas of concentration included taxation, trade, Social Security, and budget matters. In addition, he was Congressman Archer’s chief political advisor and liaison to Republican Party groups at the local, state, and national levels. In early 2001, Mr. Carlson served as chief of staff to Congressman John Culberson (TX-07). Prior to his service with Congressman Archer, he worked for former Congressmen Don Riegle and James Harvey, both of Michigan.

From March 2001 to January 2023, Mr. Carlson worked at PricewaterhouseCoopers LLP as their managing director of tax policy services - legislative & regulatory services, where he brought his extensive Capitol Hill and international experience to the firm. Mr. Carlson's significant global background includes representing Congressman Archer on international issues worldwide and service as a senior advisor to the United States-Asia Foundation, where he has led member and staff delegations to Asia. In addition, Mr. Carlson has been a member of the Congressional Staff Advisory Committee on International Trade Policy of the Council on Foreign Relations, a member of the Steering Committee for the Congressional Staff Forum on International Trade of Georgetown University’s McDonough School of Business, staff liaison for Congressman Archer to the U.S.-Asian Business Council, and staff liaison to the MERCOSUL Congressional Study Group for the Center for Strategic and International Studies.

Mr. Carlson earned his Bachelor of Arts in international relations from the School of International Service at the American University in Washington, D.C. He served in the United States Marine Corps Reserve from 1970 to 1976.

He and his wife Julia have two sons, Eric and Scott. Julia is a former Archer Center staffer and is a member of the Archer Center Advisory Board.