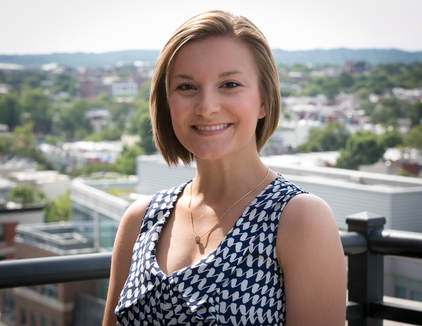 “Being an Archer Fellow allowed me to explore other areas of education that I had not gotten the opportunity to gain much experience in previously. My time in D.C. really familiarized me with the priorities and issues practitioners in higher education face regularly in policy and law arenas.”
Q & A with Ashley​

Please give us a snapshot of your current position.
The Intelligence Studies Project (ISP) is an academic organization at UT Austin. ISP's research and initiatives focus on expanding the reach of academia related to intelligence studies and national security. I help achieve this mission by developing relationships with partners, such as the Longhorn Center for Academic Excellence and Goodfellow Air Force Base, coordinating events, and organizing research initiatives.

What has been your general career path?
My career path has been rooted in higher education since I entered my second year at LSU. Since then, I've worked at a number of public, four-year universities, focusing on academic services, community outreach and student affairs.

How has being an Archer Fellow influenced your professional path and goals?
Being an Archer Fellow allowed me to explore other areas of education where I had not previously had the opportunity to gain much experience. My time in D.C. really familiarized me with the priorities and issues practitioners in higher education face regularly in policy and law arenas. The insights I gained from my experience as a Fellow really reaffirmed my commitment to social justice in education.

What do you value the most about your experience as an Archer Fellow?
The connections and relationships I built with my cohort, roommates, co-workers and Archer Center coordinators were easily the most valuable and rewarding parts of my experience as an Archer Fellow. The ability to talk with, learn from, and have meaningful discussions on politics, race, religion and everything else under the sun, was truly a highlight of my experience. My time in D.C. would not have been the same, or nearly as impactful, without these people.

What was the most important thing you learned as an Archer Fellow?
Dr. Swerdlow imparted a strong sense of curiosity on me, always encouraging Archer Fellows to see the most common things in ways that no one else had before. Trips to monuments and museums were full of insights that opened my eyes to new concepts I hadn't considered before. The most important lesson I learned from this: stay vigilant and committed to developing deeper understandings and criticisms of the world and systems of power around us.

What do you value the most about being an Archer Alumna?
To me, being an Archer Alumna means that I am connected to a supportive network of some of the most diverse, intelligent and hardworking people in the country (and world!). Many of the Archer Fellows I know have such a wonderful dedication to public service, some working in federal and state government, some with non-profits... being a part of that network is so rewarding.

What is your favorite memory from the program?
My favorite memory was waking up at 4:00 AM to stand in line outside of the Supreme Court to witness the decision for the Whole Woman's Health v. Hellerstedt decision. It was really amazing to get to see the U.S. judicial process play out alongside Archer Center staff and several other Archer Fellows. Just being in the Supreme Court building was an experience; watching a decision was that much more impactful.

Do you have advice for prospective students?
For some of us Archer Fellows, those three months in D.C. are the first taste of any kind of college-based study abroad program. I encourage all students to go for it and apply to be an Archer Fellow, because it really is a unique opportunity to branch out from the familiar and grow immensely as a person, educator, scientist, etc. Don't be afraid to say "yes" to that experience.